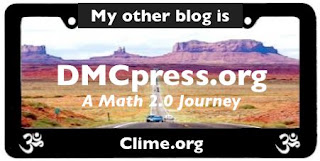 Welcome to my other blog. Starting in September this will become my main blog and CLIME Connections will then be my other blog. Why do I want to put it on the backburner? Well, I've been involved with CLIME since 1986 and it's time for me to move on. Not immediately. I'll be stepping down as president and proprietor of the CLIME organization at the end of the 2012-2013 academic year.
One of the goals I wanted to accomplish after I retired from Stevens/CIESE in 2007 was to help put Web 2.0 on the math teacher's radar screen as they plan for their student's learning experiences. Last April at the NCTM meeting in Philadelphia I had a revelation that the math community had turned a corner and Web 2.0 had made its imprint. For the first time, at a annual NCTM conference attendees had free Wifi access (when it was working properly) almost everywhere in the convention center. So for the first time it made sense for a conference attendee to carry a smart device (iPhone, Android, laptop etc.) with them to the conference. NCTM made a free app available so you didn't even need to carry around the annoying program book that's never convenient when you really need it or worse if you lose the book which I'm prone to do. For the first time NCTM has sent a message that ubiquitious connectivity is the future not only for conference going but also in schools where taking advantage of this new power with students and using it effectively is the ultimate 21st century challenge.  How my vision for this new Dynamic Math Classroom as I call it plays out is what I'll be writing about in this blog.