The obvious is sometimes not so obvious. For example, here is a typical fractions addition task.

If you are student who "knows what you are doing" then your work may look something like this: 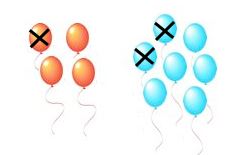 
"This is perfectly correct reasoning, showing that the student understands the concept of fractions. The students problem is that he or she is unaware that, for very good reasons, the mathematical community long-ago decided that adding fractions mean something different from adding proportions even though fractions may be and are used to quantify proportions."

Note how the "whole" changes from the first context to the next. So as the saying goes: Keep your eye not on the doughnut, but on the whole when doing fractions.

*Devlin, Keith. "Mathematics Education for a New Era Video Games as a Medium for Learning" p. 68.

The purpose of school (and what it should be)

is to keep you coming every day whether you are learning anything or not. We know that school is designed in such a way that allows adults to do adult-like things and feel comfortable about the safety of their children confined in "day care" centers where sometimes useful learning does break out. But that's not the main goal of schools  rather it is to teach you subject matter using an instructionist approach. Oh yes, you do learn a lot of stuff along the math, science, social studies, history etc. paths that you take. Stuff that for the most part students are not particularly interested in, but they go through the motions to please their teachers and get (or at least try to get) good grades to please their parents. Those were my paths in school and the rites that I accumlated served me well. As least that's what I thought. My teachers and parents were pleased. I did my job well for them. But as an adult I wondered what I would have grown up to become if schools were encouraging me to follow my paths, not theirs. For example, as a kid I was a baseball fanatic. Growing up in Pittsburgh I watched the Pirates transform from a hapless collection of misfit players that were in or near the cellar of their division in the early and mid fifties to a world champion in 1960 to the chagrin of the New York Yankees no less. My passion for baseball served me well in math class. Knowing what was on the back of every baseball card and impressing my 4th grade teacher with how fluent I was in determining the pitcher's earned run average which unbeknowst to me at the time required propotional reasoning which I really didn't get till I became a math teacher many years later. But I was a good parrot. Since I could remember everything related to baseball statistics, I parlayed that skill into success in math class. I mastered all the rudimentary math without really understanding it. But that was good enough to keep me in As throughout my pre-college years. I knew what to do to get the right answers. But what did I really know about math? Not a lot.

This all changed when I became a math teacher and started to learn math from the "outside in*" and fall in love with it for the first time. (Just being good at something doesn't mean you love it.**) -to be continued.

*Baseball is good example of learning math from the outside in. My love of baseball inspired me to learn math since it was an intrinsic part of the fabric of the game.

**Terry Bradshaw Pittsburgh Steeler hall of fame quarterback with 4 super bowl rings was usually depressed before games and had anxiety attacks afterward. In the speeches he gives today Bradshaw invites audiences to think in new ways about sacrifice, pain, competition and adversity, while giving examples of how to focus the power of dreaming, thinking and strategizing towards goals and success.

Ihor is currently working on a book entitled "The Wannado Curriculum: Scenes from a Dynamic Math Classroom" which is scheduled to be out in 2013. This blog entry is from the initial draft of the book. Comments are most welcome.
at December 16, 2012 No comments: