What is a Coherent Pedagogical Framework?

In a recent blog, Henri Picciotto (following a successful workshop series that he led) shared a participant’s comment. Henri writes:


“One of the participants in my Making Sense in Algebra 2 workshop had an interesting criticism. That anonymous participant pointed out that I presented no coherent pedagogical framework for the activities I shared. Good point! I did not present a coherent [pedagogical] framework because, well, I do not have one to present.”

So instead of following some fad-like frameworks, Henri says:


“We need to be eclectic, and select "what appears to be best in various doctrines, methods, or styles." Instead of rejecting the fads wholesale, we need to consider each one as it comes along, as all (or almost all) have some validity. Instead of shutting our classroom door and continuing business as usual, we should keep it wide open.  Without becoming a dogmatic across-the-board adopter of each pedagogical scheme, we need to learn what we can from it, and incorporate that bit into our repertoire. This is how we get the sort of flexibility that makes for good teaching. If we do that, our lessons will not fit a standard mold. Quite the opposite: they will depend on the myriad variables that make teaching such a complex endeavor.”

I too like Henri have spent more than 4 decades working in math education. I’ve also worked with many of the edu-fads he mentions. In my private school teaching days I eclectically developed my own curriculum which included lessons borrowed liberally from Harold Jacobs’ “Mathematics: A Human Endeavor.” In fact, Harold’s work helped me to develop a coherent pedagogical framework - a classroom strategy model - that served extremely well in my modeling how to teach coherent lessons to the teachers I worked with. My model went something like this.

The first part I called: Set the Stage. This part would motivate the activity that followed. (I never wrote objectives on the board.)

The second part was: Do the activity. Students would usually work in groups. They would discuss and record their findings on a handout I would give them. (See 5th grade example.)

Finally (and maybe most importantly) was Debrief. What did we learn today? This is where the objective is revealed or left open for further noticing, wondering and even debating.

This was the model I used with teachers who were teaching math in conventional ways. For teachers who were interested in exploring more innovatively, I also modeled a collaborative project approach - usually referred to as Project Based Learning (PBL) which was an edu-fad back in the 1920s, but recently is undergoing a revival according to the Buck Institute. What I like about PBL is that it takes into consideration student interest. My example of PBL is the Noon Day Project which is a recreation of the measurement of the earth done by Eratosthenes in 200 BC. See my blog entry about it here.

During the 1980s I was creating math "apps" that I called Microworlds because they were written in the Microworlds programming environment. Today some of these microworlds still exist using a different platform. In this blog I am featuring the Factor Game which you may be familiar with because of its availability in NCTM's Illuminations library. NCTM acknowledges Connected Math as the source for this game. I used the game in a framework similar to the lessons that Connected Math uses. They do a "3 Act" sequence popularized by Dan Meyer only they call it the "Launch-Explore-Summarize" sequence. In my teaching days I used the “Set the Stage-Do the activity-Debrief" strategy. Of course, Madeline Hunter set the stage for all of us "3 Act" fans with her very dated  "anticipatory set-instruction-independent practice" strategy - not anything I would recommend today. Here’s my Factor Game’s three part strategy.

How to play the game
This is  a large group activity. Split the class into two groups and assign a captain to each group. On the blackboard or white board tape sixteen 3 by 5 cards (or use post-its) numbered from 1 to 16. (See Figure 1.)

The teams compete for the highest score by picking numbers from the game board (Figure 2).  For example, let’s say Player A chooses 15. That means that the 15 card gets moved to team A’s column and team A has 15 points. Meanwhile Team B is entitled to receive the factors of 15 (1, 3, and 5) for a total of 9 points. (See figure 3.) 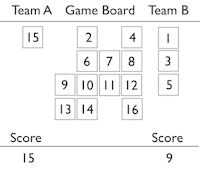 Whether Team B gets the points or not depends on them knowing that they are entitled to getting those cards. The students have to tell you (the teacher) what to do. Here’s an example. Let’s say Team A goes first and after some discussion they decide to choose 15. The team captain will then announces their choice. You then move the 15 card to Team A's total. You then ask Team B if there are any cards on the board that they are entitled to. The team B captain would direct the teacher to move the 1, 3 and 5 to Team B's hopper for a total of 9 points. (See Figure 3.) If team B doesn’t know or makes a mistake it is the obligation of the other team to catch it. This keeps the students attentive and engaged. If some errors are not picked up by the students, the teacher should make sure they are aware of it. One problem might be that team B chooses a number that is not a factor of 15.  Team B would then lose their turn.  Play continues until all the remaining cards do not have a factor on the board. The game ends at that point. Team with the highest score wins.

Important note: Play one game as a practice learning game. In this way the students discover the rules for the game on there own. And that makes it more exciting for them.

Though Team A went first they made a bad choice because they gave up 9 points. A better first choice would have been to take the largest prime number which was 13. Team B would have received only 1 point for a 12 point advantage. That's a very large disadvantage to overcome in a game consisting of only 16 numbers.

Here's another explanation of playing the factor game with 30 numbers on the board.

Explore (Do the activity)

Question for students: What did we (including the teacher) learn from playing the Factor Game? Did you find that some numbers are better than others to pick for the first move?

Followup activity: Make a table of all possible first moves (from 1 to 30).

What is the best first move in a game of 30? Explain.

The Factor Game applet was adapted with permission and guidance from "Prime Time: Factors and Multiples," Connected Mathematics Project, G. Lappan, J. Fey, W. Fitzgerald, S. Friel and E. Phillips, Dale Seymour Publications, (1996), pp. 1‐16. However the idea for the Factor Game was predated by Dr. Factor which originally appeared as one part of a four part program called Playing to Learn published by HRM and Taxman circa late 70s early 80s. David Bau writes about Taxman in his 2008 blogpost:


The Taxman game is (apparently) an old programming exercise. But it is also a good game for practicing factors [and problem solving]. […] Here is a gadget that applies the rules of the game for you. The board defaults to 100 numbers but you can start with 20 by changing the number next to Restart button. Can you beat the Taxman?

The Taxman metaphor is a good one because the factors can be thought of as the currency to be paid to the taxman. If no factors remain for the numbers that are left on the board, the taxman (greedily) gets the rest of the numbers and the game is over. It’s challenging to beat the Taxman, but if you keep trying there is a sequence to beat him in the 20 game. Try it for other numbers as well.


It is worth playing without reading anything else - it is not too hard to find a heuristic that beats the taxman. The game was written up in an article by Robert Moniot in the Feb 2007 MAA Horizons - an optimal strategy is not known. I've gotten up to 121 points on the 20-size board; I am pretty sure this is not optimal. Can you beat the board with say 30 squares? What is the best score you can get?

Robert Moniot shared a little history about the Taxman game:


After the Math Horizons paper appeared, I learned that the game (Taxman) was invented by Diane Resek of San Francisco State University. She writes: “I came up with the game when I was working at the Lawrence Hall of Science in Berkeley from about 1969 to 1972. I was coordinating a grant Leon Henkin (UC Berkeley) and Robert Davis (I think he was at U of Illinois at that time) had from NSF to work with K-6 teachers in the Berkeley Unified School District. One of the things I tried to do was to come up with interesting ways for kids to practice their skills or their facts which would involve them in some thinking and not be so boring. The Taxman was one game I came up with for multiplication facts. It was named for the Beatle's song -"Taxman". At the same time other people were working with kids on teletype machines. They taught them Basic and had games on it for them to play. When I came up with a game or an activity, they would turn it into a program. (slightly edited). (Source)