This entry first appeared as an online article in 2005 inspired by the Math Forum's Toolfest 2005 event. It's been updated to be a blog entry in Scenes from a Dynamic Math Classroom.

I spend a lot of time in schools helping math teachers and students use various software programs. Some of these programs I especially like because they usually reveal something interesting about the learners and their approach to solving problems. One example is Fraction Darts (1) which is a microworld designed to help students with comparing fractions. The context is an engaging darts-like game where the object is to pop a balloon located on a number line between 0 and 1 by "throwing" a number in fractional form. Where the dart lands in relation to the balloon offers a clue as to the selection of the next "fraction to throw."

In one of my staff development sessions I had two veteran 6th grade teachers play a few rounds of Fraction Darts. Given their many years of teaching 6th grade math I assumed that they would like the program and find it easy to use. I was right about them liking the program, but I was surprised that they found the activity also very challenging! 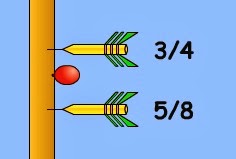 Here's a game of Darts in progress. Each teacher has taken a turn throwing a dart. The first teacher tried 3/4. Noticing that 3/4 was too large, the second teacher chose 5/8 which was too small. Since these teachers had a lot of years under their belts teaching fractions, I just assumed they would take the (obvious?) strategy of finding a common denominator to choose their next dart. For example if they chose 8 for a common denominator then they would need a number between 5/8 and 6/8. With fractional notation this is difficult to "intuit" since it is not obvious what is in between 5/8 & 6/8. (Fraction Darts won't allow 5.5/8.) Of course 16 is a better choice for the common denominator because you get 10/16 and 12/16 then the number in between, 11/16, is easy to determine. However these teachers took a different route. Here's the dialogue that followed (as best as I can remember it.) I'll call the teachers Alice and John.

Alice: We now need something smaller than 5/7 and bigger than 5/8.

John: Let's try it. (The balloon pops.) Bingo!
Alice: This is cool!
Alice and John continued playing several more rounds.  So what skills did they need to know to eventually pop the balloon?
1. You can make a fraction smaller if you leave the numerator alone and increase the denominator. (For example, 4/6 is smaller than 4/5.)
2. You can make a fraction larger if you leave the numerator alone and decrease the denominator. (Revisiting the previous example, 4/5 is bigger than 4/6.)
At first glance this appears counter intuitive. But it works because in 4/6 you are dividing your unit into more pieces than 4/5 so each piece of 4/6 will be smaller than 4/5.

11/16 is what I expected the teachers to come up with but they surprised me by choosing a trial and error way to do it.

My teachers were both pleased as punch doing this activity and couldn't wait to try it with their kids. On my next visit to their classrooms, I wanted to give their 6th grade students a pretest before starting  to play with Darts. Here is what I gave them. 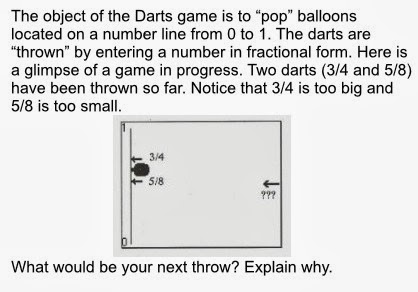 There were 17 replies. Here are some of them.
5 out of the 6 students who chose 11/16 (a fraction that would pop the balloon) did not explain why!

Another successful choice was 4/6. They chose it (I think) because 4 was in between 3 and 5 in the numerators and 6 was in the middle between 4 and 8 in the denominators. Unbeknowst to them and me at that time was that if you take the average of the numerators and the average of the denominators and make a new fraction out of  it, that number will always fall midway between the original fractions. (See my proof.)

As time for my inservice was coming to a close the teachers were investigating another question: What happens to the fraction if you add 1 to (or subtract 1 from) both numerator and denominator? Subtraction makes the new fraction smaller and addition makes it larger. Another interesting strategy to use for playing darts. (2)


1. The idea behind Fraction Darts is an old one. Darts was created in 1973 with support from NSF in the public domain. The authors were Sharon Dugdale and David Kibbey. Many versions of the program have appeared since. The version I'm using was written in Flash in 2005 by Jason Sayres for CIESE.

2. Inventing new strategies is what Math 2.0 is all about; It's the human synergy created in learning environments when dynamic tools are used for exploration and discovery.
at January 09, 2014